I started this blog with the best of intentions to post all of the time, and well, obviously, I didn’t.  Towards the end of my pregnancy, I became exhausted, and just stopped.  My darling baby boy is now 4 months old, and with the exception of a pretty hairy first two weeks, it hasn’t been nearly as exhausting as I’ve thought, but I never got back in the blogging habit.  Sad, too, as I’ve had a few culinary adventures, including dining at Next and Aviary, which were as amazing as advertised.  I didn’t take pictures; mostly because no one else was, and I didn’t want to make a spectacle of myself, but also because I just wanted to enjoy myself, and eat the food while it was hot!  Pictures of the set menu are not hard to find, either, and are far better than I could have taken.

Since descriptions of the food are easy to come by, I’ll tell you a bit about my experience there.  First, the tickets.  I signed up for Next’s email list a year ago, when it first opened, entitling me access to their ticket site on the day it opened.  With an assist from their Facebook page, where people were posting their experiences, I managed to snag a table for two.  I had few to no difficulties, but was one of the lucky ones, as many people couldn’t get through.  After that day, even people with access were stymied.  More people were getting access as the supply of tables was dropping off, until the point that tables were snatched instantly once released, due to the number of people were trying all the time.  The experience was not unlike buying Cubs tickets online, back when people still liked the Cubs.

We arrived by taxi for our 6 PM Thursday reservation.  The experience started when the hostess saw us coming and opened the door for us.  We checked our coats, and the evening began quickly.  As every order is predetermined and paid for, our first course and first drinks arrived rapidly.  It probably goes without saying that the food was flawless, especially the duck and potatoes main course.  The presentation was also lovely — my only quibble was that many courses had several small bites, and it was hard to remember from the descriptions provided by our server what everything was.  Also, even though the room was not loud, it was sometimes hard to hear everything he said.  We did get souvenir menus at the end of the evening, but they provided no more description than the bare bones description on Next’s web site.

Most of the wine was wonderful.  For almost every glass, they left the table on the bottle so I could top off my glass if I chose.  I don’t know about others, but I didn’t take much advantage of this.  There was plenty of wine coming, so I topped off a few glasses that I liked the best, and let my dining companion taste them as well, but I didn’t go to town on the bottles.  The non-alcoholic pairings were mostly very successful and all very original.  These were the kinds of “mocktails” that I kept hoping to find while pregnant, but my hopes had generally gone unsatisfied.  Several of them were tea-based, and I’m not a huge tea drinker, but they were very good.

Dinner included complimentary water and coffee service.  Sparkling water was available, and any kind of coffee/espresso-based drink was also available with dessert.

Our dinner was on only the fourth day that Aviary was open.  At the end of our meal, I asked if there was any way we could get into Aviary.  They told us to wait, and next thing we knew, we were escorted through the door adjoining the restaurants and seated at Aviary, movie-star style!  We were, of course, stuffed, but I couldn’t pass up the opportunity.  You still have to wait a good while to get into Violet Hour, which has been open for a few years now, and I expect no different from Aviary.  I had the Sassafras drink, which tastes kind of like a root beer float, but is totally clear.  They have a long list of savory/sweet “bites”, which truly are bite-sized.  You are to order to multiples of three.  Because we were so full, we ordered only three, but they were each wonderful.  I snapped a quick picture of the food with my iPhone: 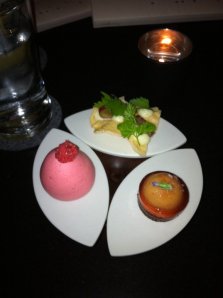 So, I’m back on the blogging wagon.  Next time I’m at an awesome place, I’ll try to take better notes.  Please check back, I really mean to update often … and perhaps I’ll even do that Evernote post I’ve been threatening you with for months!

It’s finally here, the long-awaited premier “Eat” post.  The honored restaurant is Kith & Kin, near DePaul’s Lincoln Park campus.  It’s been around for about a year, to glowing reviews, and often is referred to as one of the many new “gastropubs” — but it seemed more like your typical fairly high-end restaurant to me.  Perhaps, if the reasoning in this story about the replacement of their head chef is to be believed, that’s a recent evolution.  I can’t say, as this was my first visit.  END_OF_DOCUMENT_TOKEN_TO_BE_REPLACED