I’m so excited … my first cooking post.  With pictures, even.  The pictures were taken with my iPhone, as probably most of them will be until such time as I acquire a Canon EOS Rebel T2i (six months and waiting for the price to come down on that thing … luckily, Black Friday is conveniently timed about a month before Baby Boy joins me).

This is my adaptation of a Giada De Laurentiis recipe.  I also added a lovely, light lemon glaze, adapted from Martha Stewart.   As my first cooking post, it will also serve as a bit of an introduction into my cooking style.  Without further ado … 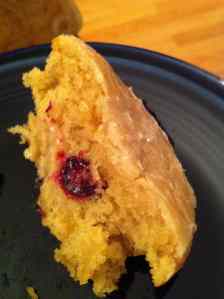 A few notes about the ingredients: My adaptations are a good representation of how I approach recipes.  The recipe originally called for nothing in the way of berries, and included some sliced almonds instead.  I generally do not want to encounter nuts in my baked goods, and almost always omit them.  Giada, like most bakers, also uses whole milk.  I keep only skim milk in the house, and am therefore highly inclined to use skim milk when I cook, except where I suspect that it might adversely affect the flavor or the outcome.  I also have a tendency to try to reduce fat, without completely wrecking the recipe, so heavy cream might become half-and-half, half-and-half might become whole milk, etc.  In any event, 2 TB did not seem to me to be crucial, so I used skim milk, and indeed, the muffins came out quite yummy.  Finally, the salt – Giada used 1/2 teaspoon of (presumably) table salt.  I use only Diamond Crystal, and one typically needs to use double the amount stated for table salt when using Diamond Crystal (multiply by 1.5 instead for Morton’s Kosher Salt).  It is a pet peeve of mine that many recipes don’t specify, and I tend to assume that they use table salt unless otherwise stated.  If they state kosher salt, I tend to use exactly the amount stated, or maybe a teeny bit more — Diamond Crystal is very subtle, and I find that it is difficult (though not impossible) to oversalt with it.

2.  Whisk flour, baking powder and salt together in a bowl (needs to be just big enough to contain the dry ingredients).

3.  Using hand mixer or stand mixer, beat sugar, eggs, lemon zest and orange zest together until light yellow, about three minutes.  I can’t resist showing a picture of the aforementioned 38-year old hand mixer.  The power cord didn’t even fall out. (Until the next step.  Sigh.)

I should note that adding eggs to any recipe is when I start fretting about spreading salmonella around the kitchen.  You should see me with raw chicken.  But imagine me with red meat!  (You’ll have to; I don’t cook with either red meat or pork.  But stay tuned for seafood, chicken and vegetable recipes.)

4.  This is what the liquid ingredients looked like after the initial mixing:

5.  Mix in vinegar and milk.  Slowly add oil, while continuing to beat mixture until combined.

6.  Mixing at low speed, add the dry ingredients to the batter in thirds.  I stopped beating before it was combined and finished it off with a rubber spatula.

7.  Not sure if this matters, but I tossed the berries in a tiny amount of flour, hoping that would keep them from sinking too much. 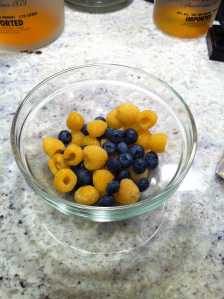 Fold berries into the batter.

8.  Fill the liners; there is enough batter to fill them almost to the top, and then some.

9.  Experiment time: I planned to glaze six of them, and simply sprinkled some raw (demerara) sugar on the other six.

10.  Bake for 20 to 25 minutes, until golden, and a toothpick inserted into the center of a muffin comes out with moist crumbs attached.  While baking, make lemon glaze — which involves simply combining just enough lemon juice with any amount of powdered sugar, until mixture is thick but pourable.  I used about 1/2 cup powdered sugar and 1 1/2 tablespoons lemon juice.  This made enough to glaze about 11 muffins.

A few final notes: I used what amounted to a mere handful of berries.  The muffins could have tolerated a few more, and had I used more, I would have worried less about distributing them evenly.  The glaze tastes a bit tart on its own, but melted into the warm muffins, it was simply perfect.  I ended up using the rest of the glaze on a bunch of the sugar-topped muffins.

These muffins were light and tasty — mildly and pleasantly citrus-y.  I’d recommend them as a breakfast or brunch item, or as dessert for people without much of a sweet tooth.