Quinoa Primavera is a recipe I adapted from the Whole Foods web site about a couple of years ago, when I’d read one of many articles about quinoa-as-wonder-food (“It’s the only grain that is a whole protein!”) and decided to make it.  This actually predated by quite a bit my recent cooking extravaganza, and I’ve made it five or six times since, which is pretty notable because there are so many recipes in my Evernote backlog that I rarely make anything more than once.  But this has so many virtues: it can be made with any veggies you have lying around, the chicken can be cooked directly from frozen, and quinoa can sit in the fridge forever … very little planning required. On top of it, while there is some prep involved, the cooking itself couldn’t be easier, and the meal couldn’t be healthier.  And it is delicious and colorful and reheats perfectly.  What more could you ask for?

The quinoa looks and feels like wet sand after it has been rinsed.

This is what perfectly cooked quinoa looks like. See the little string around each grain? That means it is done. If you see that, and there is no water left in the pot, get it off the heat before it starts sticking. 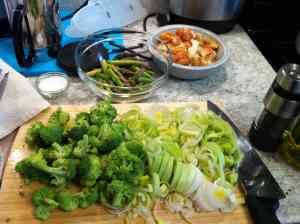 Some of the prepped vegetables. This recipe used to feel like it required a lot of prep, but this time, it seemed be really fast and easy. No peeking at the bowl of torn-apart croissants. That's an ingredient for another post.

* While sauteing, add more olive oil as needed.
** The original recipe calls for 1/2 of a red onion, which is certainly colorful.  As noted in other posts, I like a lot of onion, and will use whatever is on hand.
*** You can use fresh peas, too, of course, but I love the petite ones.  They are really sweet, and even people who reflexively avoid peas like them if they can be convinced to try them.  I don’t think they need to be thawed first — even though they get thrown in near the end they will thaw and heat through almost immediately.  If I think of it, though, I throw them in the fridge during prep.  They thaw very quickly.
**** Lots of options with the chicken.  The recipe calls for only one cup.  Of course, if you want to make this vegetarian, you can leave it out altogether.  I find that the two shredded breasts fit perfectly in the pan and make for a heartier meal.  I usually roast them, often straight from the freezer, but this is a good place to use leftovers, store-bought rotisserie chicken, etc.
***** Broccoli was my adaptation.  The original calls for wilting some spinach at the end instead.  You can do both, but that gets to be a lot of veggies, a lot of prep, and very little room in the skillet.  I happen to just love broccoli.  Be creative, and use what you like/what you have.

1. Prep all the vegetables and chicken, as you won’t have time once you begin cooking.

3.  Rinse quinoa under cold running water and drain. Combine water and quinoa in a medium saucepan and bring to a boil.  Add pinch of salt.  Reduce heat to a simmer, cover and cook until quinoa is tender and all the water is absorbed, 15 to 20 minutes (but check frequently, it could be faster).

4.  Heat olive oil in a large skillet over medium heat. Add onion and broccoli.  Salt.  Stir.  After two or three minutes, add the asparagus. Salt.  Stir.  Cook, stirring often (but with lid on when not stirring), until broccoli and asparagus are tender and bright green, 5 to 7 minutes.

5.  Add garlic and peas and continue cooking for another minute.

7.  Season with salt and pepper.

1.  If you start the quinoa and the vegetable sauté at the same time, the quinoa will be ready right on time, or a bit late.  You might want to give the quinoa a head start.

2.  I always use my All-Clad 12″ Fry Pan with Lid for this recipe.  It is a tight fit, but it fits.  Perhaps one of the straight-sided sauté pans would be better, given the volume of food that ends up in there, especially if you use a lot of chicken and broccoli, but not having one, I couldn’t say for sure.

3.  Season this at every step.

4.  Quinoa really is a kind of wonder food; you don’t need a “quinoa recipe” if you want to start using it.  Just use it instead of rice or pasta in whatever you were already planning to make.

5.  I apologize for the dopey picture layout.  Believe it or not, I spent more time trying to get that right than I did writing this post.  And it still looks wonky.  Ugh.

One thought on “Quinoa Primavera — a house specialty”